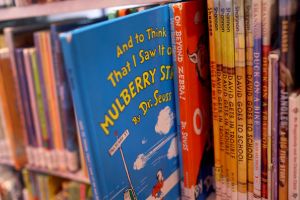 Dr. Suess books have been a staple of children’s classrooms, libraries, and the homes of families around the world for decades, but controversy surrounds a handful of previously published releases. On Tuesday (March 2), the business the oversees the affairs of the brand is pulling six of its books from its offerings due to racist and insensitive images.

As reported by The Associated Press, Dr. Seuss Enterprises told the outlet that among the six books, such as And To Think That I Saw That On Mulberry Street and If I Ran The Zoo, will be removed from its publishing schedule.

“These books portray people in ways that are hurtful and wrong,” Dr. Seuss Enterprises said in a statement to The Associated Press on the late author Theodor Seuss Geisel’s birthday.

“Ceasing sales of these books is only part of our commitment and our broader plan to ensure Dr. Seuss Enterprises’ catalog represents and supports all communities and families,” the statement continued.

The other books that will no longer see the light of day are On Beyond Zebra!, Scrambled Eggs Super!, The Cat’s Quizzer, and McElligot’s Pool.

This comes after reports regarding Virginia’s Lound County Public Schools removing the books from its collection and student offerings went wide but a reporter from The Washington Post did some fact-checking and offered a deeper perspective of what school administrators were hoping to achieve.

The AP added in its reporting that the decision by the company to halt all production and future sales of the now-banned books had been in the works since last year.

“Dr. Seuss Enterprises listened and took feedback from our audiences including teachers, academics and specialists in the field as part of our review process. We then worked with a panel of experts, including educators, to review our catalog of titles,” said the business in another portion of the statement.

Via The Art of Dr. Seuss website, an examination of the racist images Geisel drew, most especially his depiction of Asian characters. However, just as the Civil Rights Movement began to crest, Giesel made several changes to his work and began writing from a more inclusive stance. However, the past images were readily found in his older works and a change was then handed down from on high.

Not surprisingly, some conservative pundits pointed to the move as a byproduct of so-called “cancel culture,” a near-mythical occurrence that has actually canceled nothing but has called into question those who chose to avoid accountability and restoring a sense of justice by those who were wronged by Giesel’s drawings.